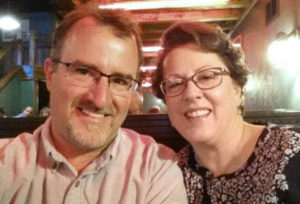 Part of the original team of people that helped launch The River Church back in 1997, Steve and Joan Crombie together have led the congregation and leadership team since they were appointed pastors in August 2001. In January 2011 Steve and Joan were both ordained by the Network of Related Pastors.

Married since 1985, the couple has five children and eight grandchildren. Pastor Steve and Joan have had a love for the Faribault community since they moved here in 1986. They want to see Jesus exalted here and God’s kingdom to be established in both Faribault and the surrounding area.

Growing up in Faribault, Pastor Tony and wife Meg believe God has called them to share the hope of Jesus with the community and surrounding area. Tony and Meg have been married since 2010 and are proud parents to their 4 young children. Over the years they have served within The River Church in many ways; officially becoming Associate Pastor in July of 2019, Pastor Tony has also been the worship leader since 2010. Their passion is to see people come to know Jesus and all that is found in Him as we connect and grow together.

Jason and Cassie have led the Student Ministry at The River Church since February of 2019. Jason is a graduate of Powerhouse Training Center in Katy, TX, and Cassie a graduate of the University of Wisconsin Eau Claire. Living their lives seeking after Jesus, their desire is to see the students of our community captivated by the love of Christ and pursuing Him wholeheartedly.